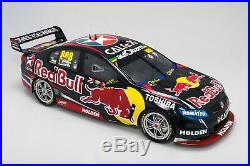 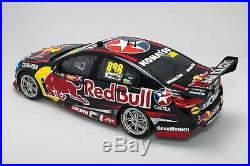 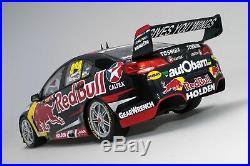 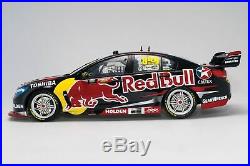 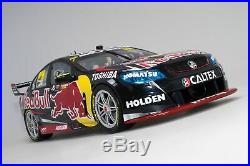 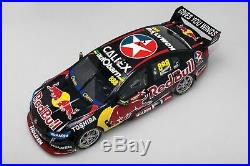 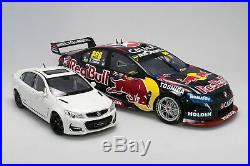 Biante Model Cars are thrilled to announce a new partnership with Triple Eight Race Engineering to exclusively produce limited edition 1:12 Scale models of iconic cars raced by one of the most successful teams in Australian motorsport. The first model in this range is one that is sure to excite collectors, its the Red Bull Racing Australia Holden VF Commodore driven by Craig Lowndes and Steven Richards to win the 2015 Supercheap Auto Bathurst 1000. This 1:12 Scale replica of the 2015 Bathurst Winner is a really impressive size. It roughly measures over 40cm from front to rear, around 17 cm from mirror to mirror and around 12cm from wheel to roof. You can appreciate the large scale in the images of the 1:12 sitting next to one of the recently announced 1:18 Scale Holden VFII Commodore SS-V Redline models (which you can see in the product images). This model will be produced in an exclusive limited edition with the number to be set based on pre-orders received. It will be presented in deluxe packaging along with a commemorative flyer and numbered Certificate of Authenticity.
Other than the sheer beauty of the size of this model, there are numerous additional features worth noting. They include using injection moulded glass housings for added strength and accuracy, photo etched parts, detailed brakes, wheels and we have also included the hamburger camera on the roof along with GPS tracker on the boot. Despite the model being produced in sealed body resin (in order to maintain an affordable price point for collectors) there has been no expense spared in replicating the interior cockpit.

The interior detail includes full decoration, faithfully replicated seat and painted interior characteristics along with fabric seat harness and window netting. The model has an impressive feel and weight to it and will make the perfect centre piece in any Triple Eight, Craig Lowndes or Bathurst Winner collection. An item isn't received or it isn't as described in the listing.

Goods Not covered by Guarantee when the below are true. Items that are damaged in transit that are not insured.

All items require a signature upon receipt and should be checked for external damage prior to acceptance from courier. If the item is not in its original condition and original packaging upon return. If the item has been modified or tampered with in any form or is damaged due to improper or attempted installation. Item not being used for its intended purpose.

Pre - order products if delivered within 3 months after release date. Duplicate claims through other resolution methods. And we will do our best to make sure youre happy. The item "Craig Lowndes 112 Holden VF 2015 Bathurst Winners Richards Red Bull Not 118" is in sale since Tuesday, September 17, 2019. This item is in the category "Toys, Hobbies\Diecast Vehicles\Cars, Trucks & Vans\Contemporary Manufacture". The seller is "bestmancave" and is located in MOUNT GAMBIER - SA. This item can be shipped to Australia, North, South, or Latin America, all countries in Europe, all countries in continental Asia, New Zealand.