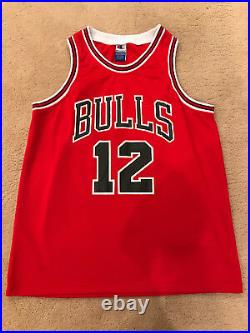 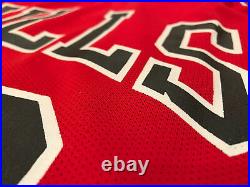 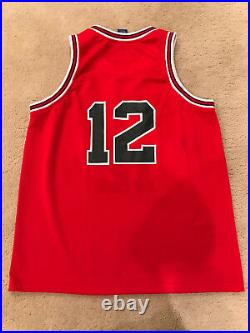 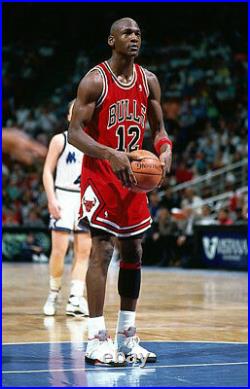 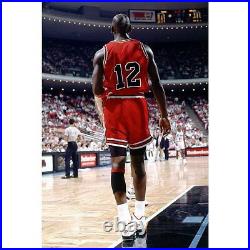 This jersey is TRULY AUTHENTIC. It is exactly like the one Michael wore only one time in his career: February 14, 1990. That night, the Chicago Bulls were playing in Orlando. Before the game, somebody stole Michael Jordan's jersey from the locker room. This was before the days when NBA teams brought multiple jerseys for each player to each game (this game is one of the main reasons that practice began), so with MJ's only jersey missing, the Bulls had to scramble. Their first thought was to. Go out into the stands and find a fan wearing an MJ jersey, and ask the fan if Michael could wear it for the night. This is a thing that actually happened in NBA history. Unfortunately, none of the jerseys that were in the stands before tip off were big enough to fit MJ comfortably enough that he could have full range of motion during the game. So MJ was forced to wear the Bulls' emergency back up jersey. Teams back then would have a spare jersey with them (commonly referred to as "the blood jersey") in case a player got blood on his normal jersey during the course of a game. They would switch out their bloody jersey for the emergency back up and play the rest of the game in that, causing some logistical weirdness for referees and scorekeepers trying to keep track of fouls, and other hilarious nonsense alike. Okay, jump back to February 14, 1990. So MJ decides he's going to wear the blood jersey. He was pretty unhappy about this, because he's incredibly superstitious. He's worn the same pair of shorts under his uniform every game of his career since college. He's never worn a Bulls jersey with a number other than 23 (at this point). And 12 is just a dumb number. You can fight me about that.

But all even numbers are dumb. Another goofy thing about this particular jersey is that, since it could have been worn by any bulls player in need during the course of any game, there was NO name on the back. So it felt goofy to MJ, and it looked goofy to him. If there's one thing that we know about Michael Jordan, it's that he uses anger to fuel his performances, even if sometimes that anger is manufactured. So MJ goes off for 49 points in this one, and vows to NEVER autograph a jersey in the city of Orlando for the rest of his life.

And, in the last 28 years, he has never signed a jersey there. Mitchell & Ness makes a version of this jersey that they claim to be authentic, but their version has stitched numbers. The problem with that is, Champion (who was the official provider of NBA jerseys at the time) used heat-pressed letters and numbers on all of their jerseys. So while the M&N jerseys look and feel really nice, they are NOT what was really worn that night in Orlando. This jersey is a Champion made size 40 (Medium) jersey. All letters and numbers are heat-pressed onto the period-appropriate mesh jersey. There is no name on the back (some poorly made replicas have a name on the back, but as you can see in the pictures of MJ actually wearing this jersey during the actual game, that was not the case).

If you have any questions about the jersey, or would like any more detailed pictures, do not hesitate to contact me. I respond to all messages within 24 hours. The item "Michael Jordan TRULY AUTHENTIC Champion #12 Chicago Bulls Jersey Sz 40 Medium" is in sale since Tuesday, May 22, 2018.

This item is in the category "Sports Mem, Cards & Fan Shop\Fan Apparel & Souvenirs\Basketball-NBA". The seller is "danthemjfan23" and is located in Skokie, Illinois. This item can be shipped to United States.